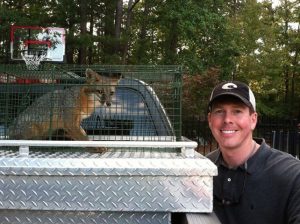 Live trapping is safe and humane. Trapping requires time and energy but can be very efficient. Trapping is regularly used by our Resolve Wildlife Technicians for the humane trapping and relocation of coyote, raccoon, opossum, fox, squirrel, rat, mouse, mole and armadillo in order to limit damage to households, food supplies, farming, and property. Trapping is useful to control over population of certain species. Trapping is also used for research and relocation of wildlife.

Our traps are designed to catch live animals in a cage. They are usually baited, sometimes with food bait and sometimes with a live “lure” animal. Common baits include cat food, peanut butter and fish. Cage traps usually have a trigger located in the back of the cage that causes a door to shut; some traps with two doors have a trigger in the middle of the cage that causes both doors to shut. In either type of cage, the closure of the doors and the falling of a lock mechanism prevents the animal from escaping or harming itself or others by locking the door(s) shut.

Supporters of cage traps say that they are the most humane form of trapping, and in some countries are the only method of trapping allowed. Cage traps are used by animal control officers to catch unwanted animals and move them to another location without harm.

Cage traps are also used for capturing small animals such as squirrels in attics or basements of homes, for removal to locations where they are released unharmed.

Your Resolve Wildlife Technician can also employ a variety of devices and strategies to avoid unwanted catches. Ideally, if a non-target animal (such as a domestic cat or dog) is caught in a non-lethal trap, it can be released without harm. A careful choice of set and lure may help to catch target animals while avoiding non-target animals. Although we cannot always guarantee that unwanted animals won’t be caught, we can take precautions to avoid unwanted catches or release them unharmed.